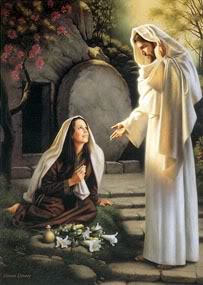 Christ the Lord has risen! He's alive! Do we believe this? The disciples spent three years with Jesus, living and learning from Him. They saw the healings and miracles and knew He was the Messiah. But they didn't expect Him to die. They witnessed His arrest, trial, and crucifixion, though some ran away and hid. Some helped bury Him. Then they hid together and grieved.

Three days later they saw Him! Can you grasp the surprise, amazement, and yet belief in their voices?
Mary said, "I have seen the Lord! (John 20:18) She knew it was Him!
The two men on the road to Emmaus did not recognize Him until He broke the bread and revealed Himself to them. They said, "Were not our hearts burning within us while he talked with us on the road and opened the Scriptures to us?" (Luke 24:32) Their hearts burned within them even before they recognized Him. Does your heart burn within you in His presence?
Thomas wouldn't believe the reports of the other disciples until he saw Jesus a week later. Then he said, "My Lord and my God!" (John 20:28) I imagine he said this with a hushed and humble voice. He may have even bowed before him. Wouldn't you? Do you now?
The resurrection of Jesus Christ is the most essential doctrine of the church. Any who don't believe this truth are denying Jesus, Christianity and Scripture.
He said He was the Son of God. (Luke 22:70) He said He would rise from the dead. (Luke 18:33) And He did. He said He would return and He will. (Matthew 24:30) What a marvelous faith we have.
Blessings in the Risen Christ, Dottie

This article originally appeared a year ago on my Faith Notes blog.

Posted by Dottie Parish at 9:48 AM

Dottie Parish
I’m a Christian, wife of a sweet husband, mother of three amazing adult children, grandmother of two fantastic grandchildren. I enjoyed a 30+ year career in clinical social work/marriage counseling, was local coordinator of The Third Option group for couples (1996-2007), author of weekly Family Counselor advice column (1980-2003), author of Love Advice: Practical Ideas for A Happy Marriage and Changing Churches: A View From the Pew. I love to read and I love word games. Most of all I love Jesus and His Church.